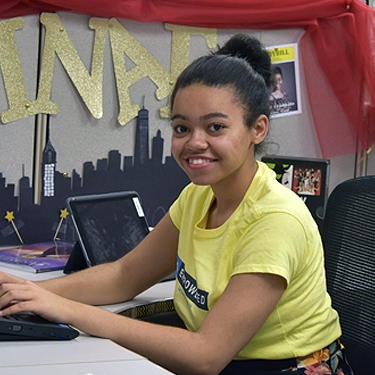 The first week of working at Empower at Glowtouch Tech was very interesting. Coming into this program I didn’t know what to expect, but as soon as I dove into the wondrous world of web coding, I became hooked. Treehouse is the platform that we nine African American females used to soak up information about html and css. Treehouse, I feel, is a very fluid platform in teaching. For example, the guided lessons have a balanced amount of quizzes and activities to check on progress. I found this function very useful because it helped me recall any information I may have forgotten and/or needed to work on.

I feel that the most challenging part of treehouse was remembering the flow of the html. For example, when setting up a webpage you need to remember that the basic order is always:

This is something that I had to practice over and over again to fully grasp. I feel that my forgetfulness of  the order had to do with all the elements in between the main parts of the coding. The most interesting thing I learned through Treehouse was how a website was set up. For example, I never knew or thought about the background to making a website. I did not realize that it took so much coding to create some of the most simple pages.

I think that the biggest take-away from Ms. Fitzpatrick was that when given the opportunity or chance you have to take it. For example, if you have a skill that you might’ve thought was useless, it may not be as useless as you thought. For example, that skill can lead you down a pathway of other opportunities and can affect your future.

I think the last thing I want to add is that I am glad I jumped on this bandwagon and started learning how to code. I see how this skill can affect my future and lead me to make adventures along the way.

I feel tht this week was very exciting. I felt more comfortable in the workplace this week. For instance, I was more accustomed to the way things worked and I feel that I have become very close with my co-workers. I feel that I have achieved a lot this week. I have started and almost finished  CSS Basics and I am well on my way to creating my first solo website. I am very excited for this, by the way. This week was also the the week when our cubicle designs were to be judged. I enjoyed every moment of it because I love to do arts and crafts. This gave me the opportunity to do what I loved and to join in on some friendly competition. I really liked the ideas that the others came up with and the amount of imagination and passion that went into everyone of the cubicles.

This week the group had the privilege of meeting two more female leaders in our community: Dr. Angelique Johnson and Stacy Servo. I really enjoyed learning about their businesses and what they do. I feel that knowing that there are so many female leaders in our community leading the future is very inspiring. It makes me want to try my best to succeed and and assist in leading our society’s future.

I was also very ecstatic about meeting our new members, Lily and Janiya. We now have a full group. They were easy to get along with and got used to everyone quickly. I like how we have such a diverse group. For example, our personalities connect with each other but are different.

Today, we had a going away party, or despedida, for Angelie. ( I think that’s how you spell it) It was very fun and I liked seeing how she reacted when we “surprised her”. I do think I kinda ruined the cat pic surprise though. ( I’m not as stealthy as I thought I was lol) . :’) Alicia also gave the group a surprise presentation. (Man we had a lot of surprises today.) It was very cool to get a snippet of her business and to see her spotlight her talent. At the end of the day we did a pop up talent show, which was pretty cool, and everyone showed off their dazzling talent! It was very cool to see another side to a majority of the group.

Well, that is all I have for today. Thanks for reading! 😉

This week I was out of town for a graduation vacation. The vacation was fun but I also burned through the time I had to complete my personal website and blog site. However, my week was full of new experiences and surprises.

Originally, I was supposed to go to Florida, but my Aunt told me that there were complications and that we were just going to stay in Atlanta. Naturally, I was devastated! I mean, it’s sort of a downgrade going from Florida to ATL. But, a day later they ‘surprised me’ with a trip to Florida. The reason I quoted “surprised” is after I got the news of NO FLORIDA, I was kinda banking on us going on pure optimism. I guess you can say that “God works in mysterious ways!” (Wink Wink) Anyway, we went to Destin, Florida and I had the time of my life!!! The first day, we went to the beach and I stayed in the water for about 3 hours. (I’m sort of in a long-term relationship with the ocean.) We went closer to the evening because of the time we arrived in Destin. The next day, we rented scooters and a scoot-car. I had to sit in the scoot-car with my G-mommy because I didn’t have a drivers license. (I know! Bogus right!?) I could’ve driven but I was kinda tardy for the license bus if you know what I mean. The wind felt good though. The sun was high as we drove on the road. I had a good laugh because my older Aunt kept telling my g-mommy to “Speed Up! You’re blocking traffic!” What made it funny was the crazy look my grandma gave me in response. Her face said ” Is she crazy? I’m not going any faster than this!” Mind you, her idea of ‘fast’ was 10mph. XD We drove through some small streets and saw a lot of people staring. What felt good though was when some little kids were smiling at us as we drove by.

When we were done with the awesome drive we headed back to the hotel.  I found out that I got a really bad sunburn while sitting under direct sunlight. I guess I should’ve put on more sunscreen.

Later that day, we went to the harbor and went on a snorkeling adventure. It was the first time I had ever done anything like it. The best parts were seeing numerous dolphins, swimming like a mermaid with flippers on my feet, and the humor from the captain and his first mate. A couple of highlights from the boat tour were the hermit crab race and the dolphin viewing as the sunset.

When the captain brought us back to the harbor, there were musicians playing good ol’ New Orleans music. The harbor was booming with life from the mobs of people around. The reason the crowds were swarming was that there was going to be a Fat Tuesday parade. The parade was awesome! I screamed as loud as I could and I got around 12 necklaces by the end of the parade. This was another first experience for me as I have never celebrated Mardi Gras before. It was thrilling and I would love to celebrate the real one in New Orleans sometime.

On our last day when we headed back to Atlanta stayed for a day, then went to Cincinnati. Everything was chill. We ate some Diorios pizza that night and chillaxed by the television. My dad’ family told me that we were going to a brunch the next morning. Knowing them this luncheon must be another AKA (Alpha Kappa Alpha) event. I went to sleep, woke up, and got ready for the day. When we got to our destination, I was somewhat confused. We were going to a restaurant for this occasion. Usually, the luncheons have been at hotels, but I just went along with it. when the waitress at the front led us to a back room, the glass doors opened and “Suprise!!!”  All of my cousins and aunts and uncles from Cinncinati were there. I was speech-less! I glanced to the right and saw a big set of polka-dotted, pink and green suitcases. Everyone was smiling and saying congrats. I tell ya, it took the iron will of God to keep my tears in. My family had thrown a surprise graduation party. It was the first time I had ever, really, been surprised. All of these experiences and surprises really made this week special and even more excited to head back to work at Empowered.

This week was shorter than most, due to the Fourth of July, but it was still very productive. For instance, I finished my HTML and Wix website. I must say, it was fun making a personal website. I could format it in any way that I wanted it.  Helping others when they were in need was also exciting. This week was very smooth but went by fast. Overall, I hope to use these coding skills in the future and do something big with them.

So, this week I found out that my Empowered partners and I are going to make documentaries. These are no mere documentaries though.  No sir, these are STEAM/STEM-related documentaries, and they are going to be amazing!! My partner is the wonderful Victoria Brown. We decided to call ourselves Tori^2 (Tori Squared).  This power team decided to make a documentary based on women in Biomedical Engineering. Honestly, it took a bit of trial and error when choosing our topic, but it all worked out in the end.  I feel like this process will go very well, and the end result will be astonishing!

To wrap up Last weeks events, we started on Swift Playgrounds, which is a coding app from apple. Although it got tough sometimes, I worked through every exercise until I got a solution. We also had the wonderful speaker, Dr. Tanya Franklin, who is an OB/GYN. She gave many great pointers about life and how to grow as a person. One piece of advice that stuck out to me was “If you show confidence & positive energy, people will want to reach out to you and help you. Her overall lesson was to show that you have CONFIDENCE!

I really enjoyed this week and I’m looking forward to the next one.

So, this week was filled with A LOT of activity. My partner and worked on building a website for our documentary. We gathered information about our topic, decided on the template for our design, and how we wanted to format our information. It was a lot of hard work due to editing the pages on our site. Every time we added an element, we got it checked with our supervisor and then went back to edit it. I tell ya, this whole week was full of trial and error but, it was also full of accomplishments and satisfaction. I feel that our (mine and Victoria’s) website has turned out really well. It is very crisp and eye-catching, and it matches the topic of choice: Women in Biomedical Engineering.

This is the link to our page for all that are interested in this very compelling website: https://msmanners10.wixsite.com/women-in-stem